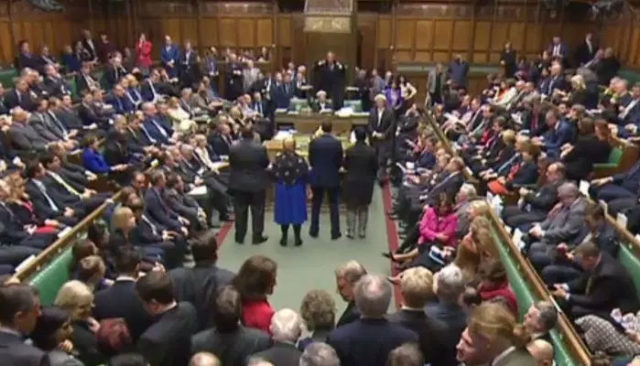 The British Government is organised differently to that of the United States and most other countries. There are basically two secitons: the elected government and the Houses of Parliament.

The Government of the United Kingdom is usually formed by the leader of the political party that wins the General Election. Members of the Government are organised into one of two ‘houses’ which make up the British Parliament:

The House of Commons is the more powerful of the two houses and is comprised of the Members of Parliament (MP’s) that are elected by the British voters. The Commons is the main place for discussing new and old policies and making new laws.

The House of Lords works with the House of Commons and scrutinise any new, proposed laws to make sure that they will work. The House of Lords is made up of ‘Lords Temporal’ (who are either hereditary or life peers) and ‘Lords Spiritual’ (Archbishops and bishops such as the Archbishop of Canterbury).

A government’s proposal, especially those regarding the amending of old laws, are checked by Parliament before they are made official.

Introduction to the Cabinet

All proposed government laws (except those involving taxes) must be passed by both the House of Commons and House of Lords. The Monarch, currently Elizabeth II has the final say, although this power is rarely used, with Queen Anne last refusing to pass a law in 1707.

Once the bill is submitted to Parliament, it goes through a series of ‘readings’ where both ‘houses’ scutinise the bill and MP’s debate on the details of the bill.

The House of Common’s rarely combats the bill and normally give the Government its vote, with the last refusal to do so being in 1986 against Margaret Thatcher.

The latest cabinet was announced by Gordon Brown on 3 October 2008. The Conservative Party, being the main opposition (The main opposition is the political party with the second most seats in Parliament (after the party that is in power)) to the current Labour Government, have their own Cabinet known as the Shadow Cabinet.

Want to Know What Direct Education is Going in? Look Towards...

Health Symptoms of Vitamin B12 Deficiency