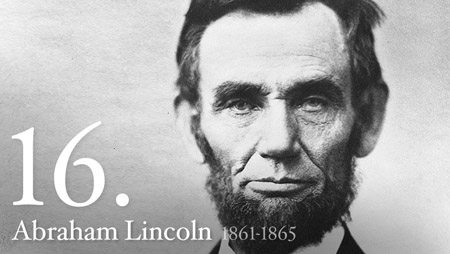 Abraham Lincoln (1809-65), the sixteenth President of the United States, is one of the most written about, analyzed, and discussed of all historical figures. Lincoln emerged from very humble beginnings to become one of the nation’s greatest leaders of all time.

Abraham Lincoln, the son of Thomas and Nancy Hanks Lincoln, was born on February 12, 1809, near Hodgenville, Kentucky. When Abraham was two years old, the family moved several miles to Knob Creek, Kentucky, to find better farmland. The following year, Lincoln’s brother, Thomas, died in infancy. When Lincoln was seven, he, his parents, and older sister Sarah moved to southern Indiana. Nancy Lincoln died from “milk sickness,” an illness caused by drinking milk from a cow that had eaten poisonous snakeroot, when Lincoln was nine. Lincoln would later call this event his “bitterest agony.” Thomas Lincoln remarried shortly after Nancy’s death. Lincoln’s stepmother, Sarah Bush Johnston Lincoln, called him “the best boy I ever saw.”

At age 22, Lincoln worked on a river flatboat. Then, he moved to New Salem, IIlinois, and began working as a clerk and surveyor. It was here that his interest in politics began. The next year, he enlisted in the militia to serve in the Black Hawk War. He did not see any fighting. After his military service ended, now-25-year-old Lincoln tried for public office a second time and was elected to the Illinois legislature. He would serve four terms. At the end of his time in the legislature, Lincoln received his law license and moved to Springfield, Illinois, at age 28. While living above a store, Lincoln began a law partnership. When he was 33, Lincoln married a twenty-three-year-old woman from a well-to-do Kentucky family named Mary Todd. The courtship was rocky, the marriage was stormy, and the Lincolns would bury three of their four sons.

Lincoln was elected to the U.S. House of Representatives at age 37. He only served one term but remained active in politics. Three years later, he declined an offer to become Governor of Oregon. At age 45, he was again elected to the Illinois legislature; however, he resigned to run for the U.S. Senate. Lincoln lost this bid. After losing his Senate race, he attended the first Republican Party Convention in 1856. In 1858, Lincoln ran for the U.S. Senate against Stephen A. Douglas and once again lost. Despite his defeat, Lincoln gained national attention. It was upon accepting the 1858 nomination that Lincoln spoke the immortal words: “A house divided against itself cannot stand.”

Abe Lincoln became the Republican presidential nominee in 1860. He won the contentious four-way race and was elected the sixteenth President of the United States with 40 percent of the vote. Months after the election, seven Southern states seceded from the Union. Four more states would join them to form the Confederacy. The Civil War began in 1861. In 1863– out of political and military necessity– President Lincoln drove the issue of the Emancipation Proclamation. Even though he was hated by half the country, Lincoln was re-elected in 1864. Five days after Confederate General Robert E. Lee’s surrender at Appomattox Courthouse, which officially ended the U.S. Civil War (1861-65), President Lincoln was assassinated by John Wilkes Booth, a popular stage actor and Southern sympathizer, while watching a performance of the play Our American Cousin at Washington, D.C.’s Ford’s Theatre. Lincoln died on April 15, 1865, at age 56.

The Emergence of Hindi Cinema in the West